In the wild, icy North Atlantic, a new restaurant opened this week. Balanced on the sea bed and rocks of the coastline, the concrete tube seems to almost slide into the sea. In contrast to the controlled aquarium environments of other underwater restaurants in other parts of the world, diners say the space feels secure, but you don’t feel trapped.

According to online magazine Dwell, the angle of the building was designed with the building’s aquatic neighbors in mind. It’s hoped that, in time, the structure will become part of its environment, acting as an artificial reef. Marine research is part of the project: cameras and other measurement tools have been installed outside the restaurant to help researchers learn about the population, behavior, and diversity of the species living in this part of the North Atlantic. 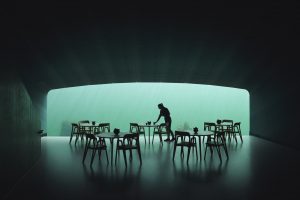 “Fresh ingredients and pure, naked flavors are of utmost importance to us,” says Ellitsgaard. “At the same time, we want to provide a unique dining experience that ushers our guests beyond their current comfort zone.”

LET'S JUST START WITH A COFFEE

For most tourism businesses, working on your buildings and grounds is a big deal. There is a lot of money and time at stake and can be difficult to know where to start. So let’s just start with a coffee.